The Making of a Cover

I am very excited to show you the cover for my newest novel, Six Degrees of Lost, which releases as an eBook on June 1, 2012. Egads, that's coming up fast!

One of the nice things about working with Musa Publishing is that authors actually have some input on cover design. (Often, when working with a publisher, this is not the case.)

Because the plot features two teens struggling to make sense of their lives and find their place in the world, we wanted teens on the cover. My preference was to have no faces, because as an avid reader myself, I really like to form my own impressions of what the characters look like.

The plot line also features lost dogs, abandoned puppies, rescue cats, a raft trip down a river, and two ancient horses.
The setting is the Pacific Northwest, with tall trees and hay fields.
There are wonderful secondary characters in the story, too, including a hay grower, an animal rescuer, boys that make bad choices, and more.
Could we get all that on one cover?

We tried to fit some of the above, but in the end, it was much too busy.

So we chose simple. The simple story of Six Degrees of Lost is about two kids, Olive and David. Here's what we came up with. 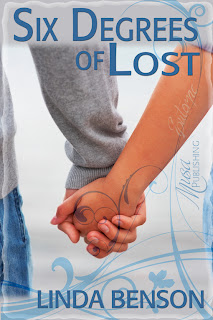 Sometimes you have to take a journey to find out where you really belong.
Coming June 1st.
You can read the synopsis on Goodreads, right here.
So tell me - would this cover make you want to read the book?
﻿
Posted by Linda Benson at 10:34 AM

Not only do I really like the cover, I also like the tag line. Based on those two things alone, I'd certainly take closer look at the book. Best of luck with your upcoming release.

Oh, thanks Jess! It's amazing how much goes into making a book. The idea, the writing, the revision, the selling, the publishing, and then hopefully when you get to a cover, you pick the right one that says "read me, read me."

Great cover and great tag line! Less is definitely more and this really hits the spot. And good you get to work with a publisher where you have input into the cover. I never have yet, and it's so important for the book. After all, in the old days, that's what the sales reps used to take round all the bookstores to sell the titles. I've been fairly lucky with covers but having a say is preferable. How did you find Musa?

Thank you, Jane. Yes, I love being able to have input into the cover, because these books are our babies, right? I found out about Musa while doing a search for publishers online, and maybe from discussion boards, too. They were a brand new publisher. I decided to take a chance with them and jump right in, and I'm glad that I did. ;-)