Please welcome author Heather Lockman today. She writes about the Pacific Northwest and she has a brand new novel out from Musa Publishing - which won an Editors Top Pick award. And I love this cover - don't you? 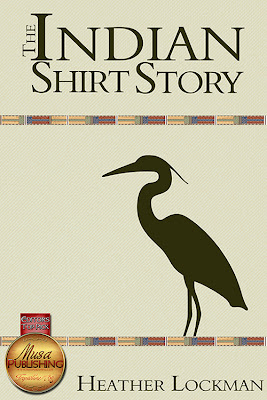 Heather, tell us a little about The Indian Shirt Story.
It's a book that's hard to pigeonhole--part love story, part modern politics, part historical saga. I call it literary, my agent calls it women's fiction, and my publisher is marketing it as literary/contemporary. On the other hand, it's stayed consistently in the Top 100 "Native American" titles on Amazon since its release two weeks  ago. Portland Book Review calls it "charming, lovely, funny and sad," which is pretty much where I was aiming.
How did you come up with the idea for this novel?
I once helped launch a historic house museum in the town where I live--a pioneer home built by settlers who crossed the Oregon Trail. There was a certain family story associated with the house that was especially problematic for us because of the appalling way it portrayed American Indian people. Yet it was an important story to the older generation of the family and likely had its roots in something that really took place. All of that got me thinking about what might have actually happened back in the 1850s, and what the Native version of that same encounter might have been. So that's how it started. The salmon, the beer, and the country music came later.
How long did it take you to write it?
Pretty much forever. The biggest surprise for me in writing fiction is that takes just as long as writing nonfiction. I somehow thought it would go faster if I could make things up. It doesn't. You still have to choose every word.
What was the most difficult part for you?
The hardest part was cutting for length. I had to throw out about 30,000 words in order to hit the hypothetical industry maximum of 120,000. And some of that stuff was really good. 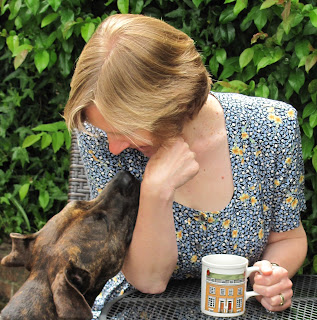 How long have you been writing, Heather? Can you tell us how you got your start?
I was 19 when I sold my first article--a personal essay to The Seattle Times. Two years later I sold my first national story to The Christian Science Monitor. I've been very, very lucky to write professionally ever since. It's been mostly a nonfiction career, though. I never intended to write fiction.
So what happened?
I was writing a lot of magazine travel stories, which obviously were assignments that required me to leave town. But travel got increasingly tricky as my husband's aging parents started requiring more and more assistance at home. When I had to postpone one trip three times because of parental emergencies, I realized I'd hit a point where I could no longer commit to magazine deadlines with any confidence that I could meet them. It was my husband, bless him, who said, "Maybe this is when you write a novel."  That project got derailed periodically by eldercare, too. Let's just say that when it came to writing the retirement home scenes in The Indian Shirt Story, I had plenty of good material.
Both of your non-fiction books are about cities in Washington state. The Indian Shirt Story takes place in a fictional town in Washington, right?
That's right. Although the fictional town of Port Heron might seem a lot like some of the hipper small towns near Seattle.
Explain the importance of a sense of place to you, and how it comes out in your writing.
I'm a fourth-generation Northwesterner. All four sets of my great-grandparents uprooted their families from the Midwest and brought them to Puget Sound country in the early 1900s. All that iconic Northwest stuff--the scenery, the history, the salmon--is stamped right into my DNA. I'm not sure I could write convincingly about any other place. At the same time, I wanted to write a Northwest novel that wasn't all brooding and dripping with moss. The contemporary plot of The Indian Shirt Story takes place in a single Puget Sound summer--and summer is our big secret out here. Contrary to popular belief, barely any rain falls in Seattle between July and mid-October. People who move here thinking they won't have to water their gardens in summer are in for a huge surprise.
Tell us about your decision to publish The Indian Shirt Story as an eBook with Musa Publishing. How has the experience been for you?
I waffled for more than a week before accepting the contract from Musa. Literary readers have been notoriously slow to embrace electronic publishing, and I knew I would to have to sell my readers on a whole new kind of technology before I could sell them an ebook. But traditional publishing has changed a lot, too. It's harder than ever these days for an unknown writer to catch the attention of a major publishing house, especially with mainstream fiction. I wrote about this subject on my own blog recently, which is very handy for answering this question. Here's the link if folks are interested: http://heatherlockman.com/blog/ebooks-and-real-books/
What’s next in your writing career, Heather? Any new projects you can share with us?
These days my nonfiction career leans more toward writing text for museum exhibits and outdoor interpretive panels, which is very different from writing for magazines. I swore while working on The Indian Shirt Story that I'd never tackle another novel, but it's possible I was wrong about that. We'll have to see what happens.

Can Kindness Be Learned from Books?

I grew up with books. My mother read to me and I had exposure to lots of books around the house, and stacks of them from the library. I learned to read very early, somewhere between ages 3 and 4, I think. As a grown-up, I still adore picture books. I love reading them to children and I also read them myself.

So I was pleasantly surprised to spot one that felt so familiar on the shelves of our public library. I'm sure it was read to me as a child. I checked it out lovingly, and could hardly wait to dive into the pages again. 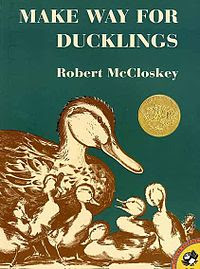 Make Way for Ducklings, by Robert McCloskey, was first published in 1941 and won the Caldecott Medal as the most distinguished American picture book for children in 1942. It tells the story of a family of ducks who are trying to make it to the Public Garden, only to encounter traffic problems along the way. 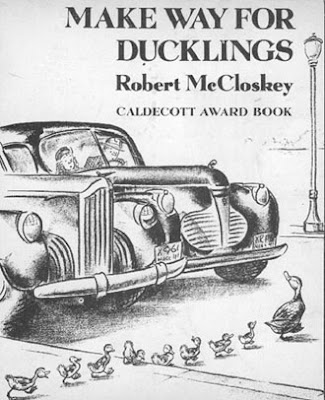 Set in Boston, this book, which has sold over two million copies, still spoke to me as I re-read it again today. Of course I remembered the kindly policeman, who sends in a traffic alert for patrol cars to stop traffic so that Mother Duck can safely get her babies across the street.

Did this early story seep into my consciousness and make me a kinder, gentler person today?
I like to imagine that one of my best traits in life is kindness to animals. Was I inspired as a young child by the art and the words of Robert McCloskey?

Could this be why I stopped my car on the road just last week, so a family of fourteen wild turkeys could cross the road safely?

What do you think? Can kindness by learned from books? Does it seep in unconsciously from the literature young people are exposed to?

Do you have a favorite children's book that might have influenced your life?
This is a totally un-scientific study, but let us know!
Posted by Linda Benson at 2:34 PM 4 comments:

If you missed the first installment of my adventures with ducks, right here, we left off with my three boys ducks, Hershey, Snickers, and Roscoe, serenely swimming in their canal, and my plan to get them some girl ducks. So I found an ad for some Swedish Ducks, and since this was a breed that I wanted to try, off I went with my pet carrier, and promptly brought home Maggie, Mary Ellen, and Blue (back row.) 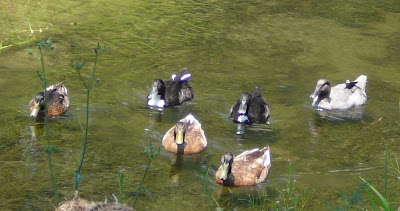 They were only 3 months old, and although they were feathered-out and appeared full-grown, they were really barely teenagers. But the boys seemed to like them (especially Roscoe, who took to them immediately) and everything went swimmingly at first. 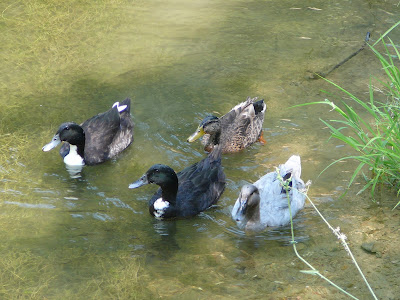 Here is Roscoe with his "women." Maggie and Mary Ellen are Black Swedish, and Blue is a Blue Swedish. 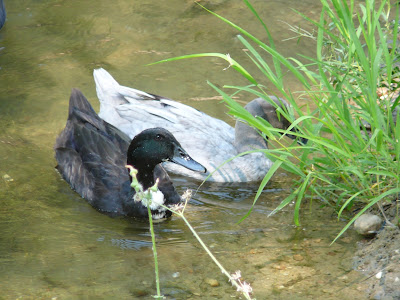 The young ducks played like teenagers at a pool party. Splashing and chasing and diving and generally being goofy. I loved watching them. I adored the way they used their little feet, piddle-paddle, piddle-paddle as if they were bicycling, stirring up the mud and algae beneath them to get food.

Everything was peaceful on the canal for the first day or so, where the two big boys, Hershey and Snickers, hung out by themselves, while little Roscoe quietly shepherded the girls around their new surroundings. 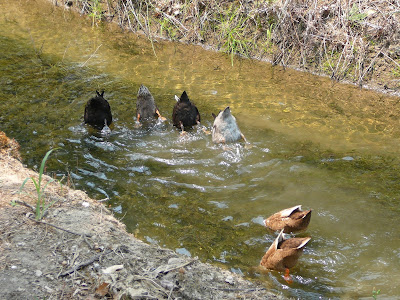 But then . . . the big boys decided to act badly, chasing the young girls unmercifully, and it really wasn't pretty. It was a full out bar brawl, and the girl ducks were totally too young for all that. Finally, I had to separate them. *sigh* And then I had to make a choice. Did I really need all these ducks? Or should I find some of them a new home?

So . . . after much deciding . . . the two bad boys went to a new home, where they will each have their own wife. And guess who got to stay here on the farm, and escort three beautiful girl ducks around all day? 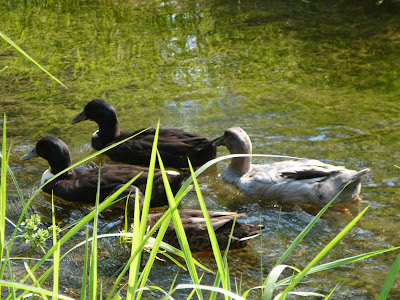 Little Roscoe, who had the last laugh after all. 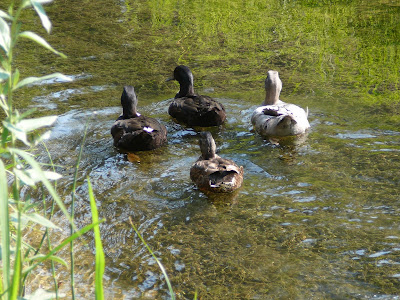 Finally, all is peaceful on the canal once again.
Gentlemen, be nice to your womenfolk.