Often I am awakened by birdsong, which is a lovely thing. But in the spring, with all birds crazily vying for territory and trying to attract a mate, it can sometimes be, well, a little much. Especially when one of them makes a quite distinct sound, and you don't know which bird is making it. 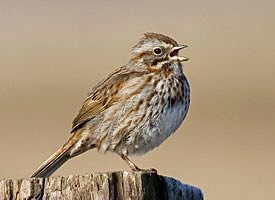 I am fairly well acquainted with the common birds around here: robins, chickadees, crows, various sparrows, swallows which arrive in the spring, and lots of others that arrive from the south also. But this spring, I became acutely aware of a different sound. It came from high in the trees, often starting at first light, (which at the moment is 5:51 a.m. *grumble*) and carrying on throughout the day.

Then it would vary the song: Ding, ding. Ding Ding Ding.

Frantically (with some deep-seated desire to know what it was - perhaps a writers' trait, perhaps a crazy person's trait) I perused all of my bird books for an itinerant bird that came north in the spring to mate and raise its family. Of course books often give crazy, well-intentioned, written out descriptions of bird songs, such as "quick, three beers" (really?) and "Oh, dear me."

But none of them mentioned a doorbell bird. What is this darn thing? Ding-dong. Ding dong, over and over! Desperate, I found a bird identification site specific to our county. With that open on one tab, I then pulled up the Cornell Bird Identification site http://www.allaboutbirds.org/guide/search and began cross-referencing each bird. (Yes, I can occasionally get somewhat obsessed with research.) The Cornell site even has recorded sounds for each bird, and I played each possibility, but with no luck. I assumed it was a Flycatcher or a Vireo singing its mating song from high in the trees. But nothing sounded like my Doorbell Bird.

As a last resort, I tracked down the name of a bird specialist from the local Audubon Society. He was very helpful, and suggested I send him a recording. So quite early the next morning, there I was in my bathrobe, standing on the porch taking a cell-phone video (with audio) of the bird. Of course, it was far, far away in the trees, and the sound was faint. Anyway, long story short, the bird specialist was stumped also.

But this dang ding-dong bird was driving me nuts! Do you think I could catch sight of it? Nooo. It had to be a smallish bird, but when I grabbed my binocs to scan the trees where it was singing, I could never spot this rare bird. All I ever saw was the standard sparrows, wrens, chickadees, and the like. By now I was sure it was some rare species, totally off its course, and it would get written up in the bird books as a rare sighting. Maybe it was a never-before discovered bird, and I would even get the honor of naming it! What should I call it: The Doorbell Bird? The Ding Dong Bird? No, none of them sounded quite right.

But I was in luck. The bird specialist ( a very helpful man) agreed to come out in the morning and listen! Here was help. I would soon come to the bottom of this!

Eagerly awaiting an opportunity to show off my birding skills, and get written up the newspaper for my rare discovery (the writer's mind doth wander) I jumped back onto the Cornell site again, listening for all of the common birds around here: the sparrows, the wrens, the chickadees. We all know what chickadees sound like, right? "Chick-a-dee-dee-dee." 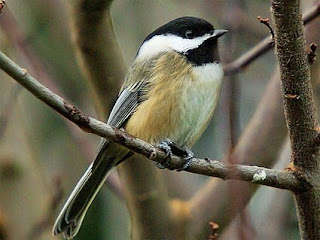 Lo and behold, on the song selection for a Black-capped Chickadee http://www.allaboutbirds.org/guide/Black-capped_Chickadee/sounds  were six different calls. I had never listened to them before, because I was quite sure I knew about chickadees. Wrong!!!

So, with virtual egg-on-my-face, I emailed the Audubon Bird Specialist back and told him he really didn't have to come at all. I was absolutely certain that my "rare" bird was actually a Black-capped Chickadee!

"You are not the first person who has been stumped by the various calls of chickadees," he wrote back, probably in an attempt to make me feel better.

But I do feel much better now. I know what it is! At 5:51 this morning, when the Ding-Dong sound woke me from high in the cedar trees outside of our bedroom, I simply pulled the pillow back over my head and mumbled "Shut up, you stupid Chickadee!" 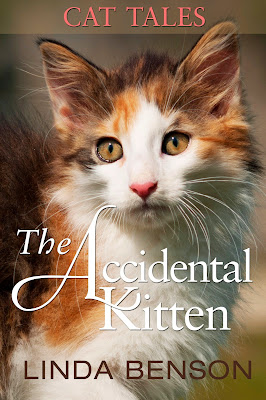 As you know, we accidentally acquired another kitten, which I  blogged about here. That probably inspired the title, but not the story line. This one is a bit of a coming-of-age story, as a young man moves away from his family for the first time. And then of course there's a kitten . . . oh well, here's the actual plot summary:

Brian has left his parent's ranch and struck out for a life of his own. But renting a run-down apartment takes most of his money, and finding a job in the city proves difficult. When he meets a quirky young woman and then rescues a tiny kitten from certain death, things become more problematic. Brian can't afford a pet, and besides, he doesn't even like cats. What good are they?

This one, like the others in the series, is also priced at $0.99. Here's the link on Amazon: http://www.amazon.com/Accidental-Kitten-Cat-Tales-Book-ebook/dp/B00X2P5YVK/

Hope you enjoy it! As long as you keep reading these Cat Tales, I'll keep writing them!