The thing about dogs is that they're always happy to go . . . 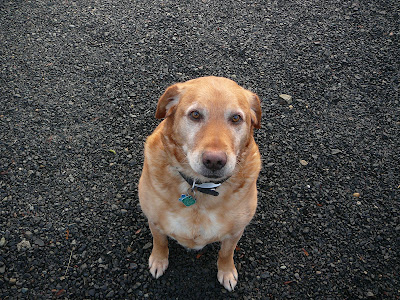 even if it's just to the barn to feed on a thirty degree foggy morning. 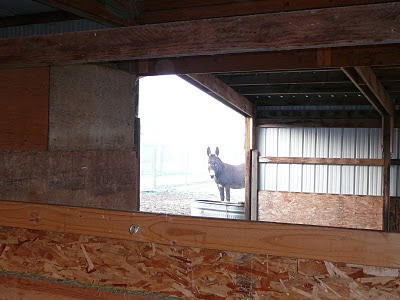 Did I hear the barn doors open? 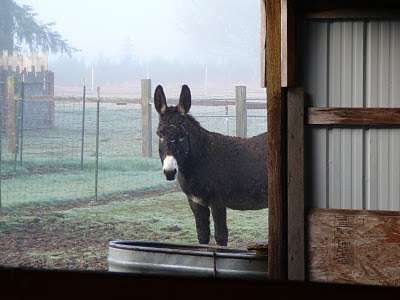 These ears don't miss a thing, and I got here first, hee hee hee. 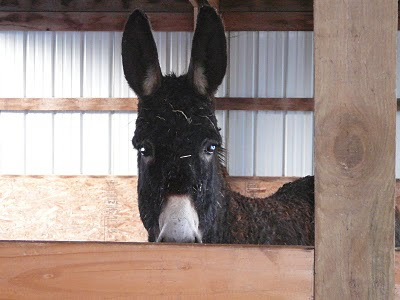 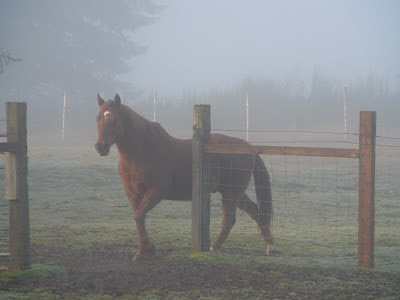 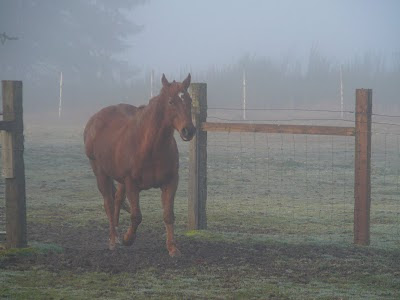 I'm Here! Is that my grain pan you are rattling? 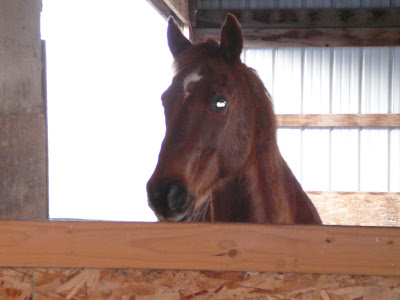 Catch any mice last night? Lucy get off the hay, please. 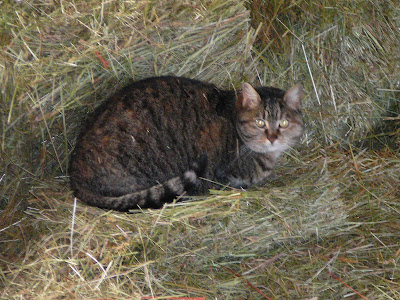 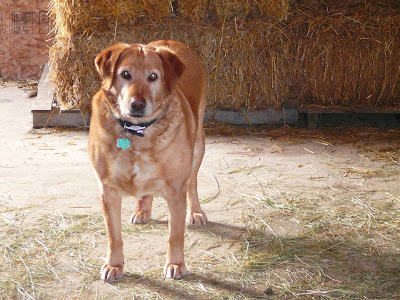 The Writing Process, or My Messy Desk

I learned a new writing term in the past few months. "Pantser." So before your mind goes wild with whatever that may conjure up - in writing terms, it means somebody who writes "by the seat of their pants." Like Me.

I eschew writing from an outline (boring) or trying to write a story arc (or is that arch? - I'm never sure.) I always begin a novel with a character whose story is begging to be told. And I progress for awhile, by the seat of my pants, hoping that the words will somehow find their way out of the ether and through my fingers onto the keyboard and miraculously appear as grand literature on my computer screen.
This method works for awhile (well, maybe not the grand literature part) but at some point I begin to wonder how much time has actually passed, and what chapter did that part about the puppies come in?
And so I break down and write a time line for myself. Here's what it looks like, about half-way through my latest middle-grade novel: 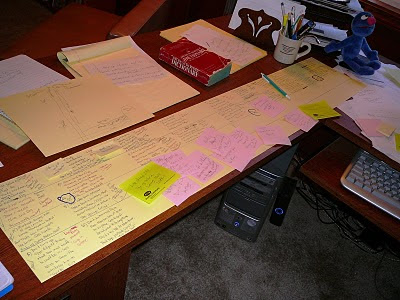 Notice I have made tiny summaries of what goes on in each chapter, circling dates and making notes about what important items were mentioned where. This helps immensely at this point. I can see what I have so far, digest where I have to go, and how many chapters it might take to get me there.
The copious sticky notes, by the way, are my way of jotting down ideas that come to my head, and things I don't want to forget. Some people use bulletin boards for this. Some writers have a separate word document open at all times on which to write notes. I like to scribble.
I have also drawn a crude map of the make-believe area where the story (so far) takes place, so I can keep track of distances and generally get a better feel for all that stuff coming at me out of the ether. Oh, yeah, and that's my little buddy Grover sitting over there on the right.
Thought you might enjoy watching this process. Hopefully in a few more months I will have that entire time-line filled in and the first draft of my novel finished. Now back to work . . .
Posted by Linda Benson at 10:15 AM 5 comments:

I started piano lessons in the second grade. My piano teacher was named Mrs. Kelly, and she came once a week. She listened to me play my songs, and then gave me exercises, scales, and songs to practice for the next week. We didn't have a piano at our house, but my grandparents lived right next door and they had a baby grand. This is where I practiced the piano daily, and where I'd meet Mrs. Kelly each week for my lesson, and there was a well-worn path between the two houses.

I can barely recall Mrs. Kelly's face. I do think she was fairly old, had grey hair and still lived with her mother, who must have been ancient. But Mrs. Kelly was devoted to her occupation and her students, and I looked forward to our weekly lessons, which I kept up with for many, many years. 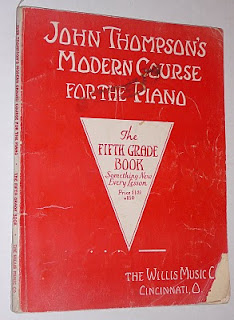 I still remember many of Mrs. Kelly's instructions on how to hold my hands (curved over the keys) and the best way to do the fingering as I moved up and down the keyboard practicing scales. I progressed through all the John Thompson song books, some of which I still own and cherish. But the piece of advice I remember the most is one I have taken to heart - and used as a mantra throughout my life. "Make the Melody Sing," she would say, as I hashed out my rendition of some well-known classical standard I had practiced that week.

Make the Melody Sing. Those words have come back to me, again and again, throughout my life. What is the most important thing? What route to I want to follow? What is it I'm trying to do here? 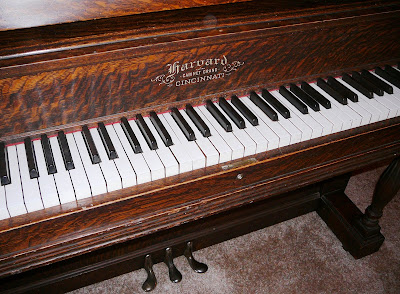 What is it I'm really trying to say? What is the most important thing here? What is the meaning of this story? Because at some point in a novel, maybe half-way through, maybe 3/4 of the way, maybe towards the end, those questions hit you smack in the face and demand to be answered. And when that happens, when I'm searching for the theme of a story, for the thread of an idea that flows from the beginning to the end, and cannot seem to grasp it, I sometimes remember my old piano teacher's word and it really, really helps me.

Make the Melody Sing.
Thank you, Mrs. Kelly, for your sound advice.
Posted by Linda Benson at 2:02 PM 4 comments:

In the Northwest, any winter day without rain is a reason to celebrate. So yesterday, since the sun was (sort of) shining, I decided to finally get my old horse Buddy out of the pasture and take him for a walk. In the process of giving him a good brushing, I noticed he had lost a back shoe. It must have happened quite recently, because I'm in the habit of giving him a good once over every time I feed or clean his stall, and I hadn't noticed it before.

Usually I have my horses' shoes pulled for the winter and allow them to go barefoot for a few months while I'm not riding very much. Then I have them shod again when the weather gets nice and riding season begins in earnest. But because Buddy seemed to do so well with shoes, I decided to keep him shod all winter. This also allowed me to ride him on gravel roads if I wanted, which can be hard on a barefoot horse.
For those of you that don't know Buddy, he's an old quarter horse gelding that came to live with us last August. He was a couple hundred pounds underweight and pretty much on his last legs. In the process of feeding him up, I was almost embarrassed to have people look in the barn.
Beside Buddy, the only other equine I have at the moment is my old donkey Josie, who I have had the privilege of owning for nine years. And Josie has, for the last few months, been suffering from an almost life-ending bout of laminitis, which caused her to lie down for long periods of time because it was too painful to stand on her hooves.
So my routine for the past few months has been (twice daily) giving a round of medications to Josie and feeding Buddy (we call him the Old Man) extra supplements and grain to build him up. And while we tongue-in-cheekily said it looked like a rescue ranch around here, it really was not that much of a stretch.
I'm happy to say that Buddy has not only gained all his weight back, but is on his way to becoming chubby. And Josie is being weaned off her meds and seems to have (for now) kicked this bout of laminitis and is once again sound on all fours. Hallelujah!! 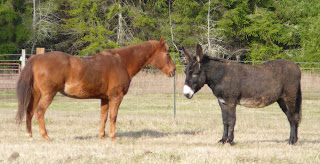 Today I decided to look for Buddy's missing shoe, which had to be in his pasture since he hasn't been anywhere else in the past couple of months. So I began the process of combing the pasture inch by inch. I walked the back pasture thoroughly before breakfast. Nada. I searched through all the mud in the paddock, which with all the rain we've had would be a good culprit to suck a shoe right off. Nothing. Later, I poked carefully through the front pasture. I found a piece of aluminum, a beef jerky wrapper, a broken piece of glass and a 3 inch bolt. I have no idea how these things got there, but I stuffed them carefully in my jacket pocket.
All the while, the old people (Buddy and Josie) were placidly munching their hay inside the barn. I was at the very end of the front pasture (and still hadn't found the lost horseshoe) when I noticed Josie striding towards me. Confidently, quickly, her humongous ears pricked forward and walking out sound, she was coming out to see Mom and get some scratching time. It thrilled me to see her moving so well, obviously pain-free.
Then I heard a funny sound behind her - something halfway between a nicker and a neigh. The old man had discovered me at the far side of the pasture. Buddy broke into a gallop and raced towards me, making a welcoming noise in his throat the whole way.
Galumph, galumph, galumph. If you've ever seen an old arthritic horse gallop - trust me, it's comical. He cut Josie off at the pass and slid to a stop in front of me, letting out an old man cough with the exertion. I put my arms around his neck and laughed.
I haven't yet found the missing shoe, but all-in-all, it's a good day here at the rescue ranch.
Posted by Linda Benson at 3:45 PM 2 comments:

So in honor of the year 2010, let's just state for the record that I do, finally, like some new things. Like iPods (Smile).
Posted by Linda Benson at 10:30 AM 4 comments: