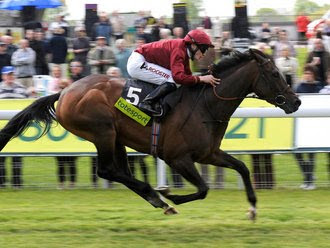 A four year old champion filly from Great Britain, who has won five prestigious races and quite a bit of money, entered the starting gates last Sunday and when they opened for the race, she refused to budge. As it turns out, this was repeat behavior from one month ago, when she pulled the same stunt in her last race.
For some reason, this just totally cracks me up. Sariska was immediately retired, and will no doubt spend the rest of her life as a broodmare, romping in green pastures raising champion foals. Apparently, she decided being a career mare was just not her thing.
I say "Hats Off to Sariska," for just taking a stand. Hey - a girl's gotta do what a girl's gotta do.
Posted by Linda Benson at 9:25 AM

Hah! This is just great. Sometimes even mares want to be Stay At home Moms. hehe!

This is just too good of a story. I hope you don't mind if I share this story over at my blog, too, and link back to you?

Love it! Ladies, of all types, need to stand up for themselves! Lol, great story. :)

I love this!!! I'm clapping for Sariska.