Update on Buddy, The Old Horse

Many of you were touched by my post, A Hole in My Heart, where I talked about bringing home an old, thin horse. So I thought I'd post an update, to tell you how he's coming along. Buddy was given to me, for free, as a rehabilitation horse: a horse that needed a barn for the winter and lots of groceries. To 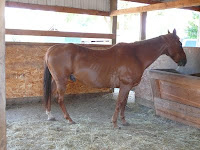 morrow, October 1st, I will have owned Buddy for exactly six weeks. Here is what has transpired in that time.

The first thing I did was fill his manger with grass hay. Buddy ate at the manger for awhile, then grazed on the pasture, then took a long drink of water, then ate at the manger, well, you get the picture. The old horse was hungry!!
And that very first night, I called my farrier. Buddy walked very gingerly, and I could not tell if it was arthritis, other lameness issues, or sore feet. To alleviate the tenderness from being barefoot, I decided to have him shod. My horseshoer luckily had a cancellation, and came out the very next day and put shoes on the old horse, who stood there like a trooper while new shoes were nailed on. Buddy immediately began moving better, and I started him on a program of hand walking - first short walks around our property, and then longer walks through the woods. Eventually I took him up and down a few hills, to build up his muscle tone and strength. This horse was so thin I felt too sorry to ride him. Besides, with the little information I had on him, it sounded like he had basically been standing around for years, with very little riding. So I worked on building up his wind, and making him stronger.

What did Buddy eat in the six weeks that I've owned him? Well, everything he could get him teeth around. In almost all the pictures I have of him, he has his head down eating. I kept grass hay in the manger free choice, which mea

nt he could basically eat as much as he wanted. I went sparingly on the alfalfa, which is very rich, and I wasn't sure he could digest it. Instead, I invested in some bags of Purina Equine Senior, a product specifically designed for older horses. This set me back (with tax) about twenty bucks a bag, but it has produced amazing results. (Thank you, Purina, and if you want to send me some coupons, you can!) In six weeks, we have gone through three bags of Equine Senior. I also started Buddy on a product called Legacy pellets, which has all kinds of good stuff like glucosomine, chondroitin, and other good things for his old arthritic joints.

I noticed a difference in Buddy's condition in just a couple of weeks. When I first got him, I could count eight ribs showing along his side. Besides that, his butt, his back, and his neck were wasting away with lack of flesh. Although not the skinniest horse I had ever seen, he was pretty pitiful. I put a weight tape around his barrel shortly after I got him, and he weighed in at 1050 lbs. This is more than I would have guessed, but he is a big boned horse, and lanky, and that probably accounted for the weight. 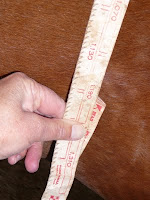 to measure his success by the ribs showing. After not too long I could only count six ribs, and then five. He was making progress. One month after I got him, I put the weight tape on him to make sure my eyes were not deceiving me. He weighed 1130 lbs. Yes!! He WAS gaining weight. But the best thing is that he was putting weight on his back, his topline, his neck, and his butt. After a few weeks, I felt he was strong enough to ride again. I began saddling him, and he stood there perfectly calmly.

So imagine my surprise when I climbed on him (I think it was the second time) and he bucked! Yes, bucked! I did not know whether to laugh or cry. Apparently he felt better, but I had wanted an old, calm horse with no training issues. N 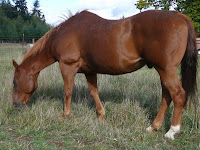 ow that this horse felt better, was he showing his true colors? But I kept working with Buddy, giving him an opportunity to show his kind side. He bucked once more with me, but it seemed to be a bluff - perhaps something he used in his past life to buffalo a novice rider or a young girl when he didn't want to be ridden.When it didn't work, he seemed to give up, and decided that it was okay to just walk out quietly and behave.

Here's where we are today - Buddy is proving to be a kind, sweet horse that gets along with everyone. He has progressed to carrying me on calm rides through the woods behind our house. I still hand walk him occasionally, because he needs the exercise and so do I. He is pretty stiff going down very ste

ep hills, but does great uphill and on the flat. Today, he weighs 1190 lbs. I am going to cut back on the Equine Senior just a tad until he reaches what I think his ideal weight should be - about 1250 lbs. When I first brought him home, he looked like a quarter horse/thoroughbred cross, or even part standardbred. Now, with more weight on him, he looks pretty much all quarter horse. Compare two pictures of him at the top of this post with the two at the bottom. Barely looks like the same horse, does it?

I am thrilled that he has gained this much weight before winter. Our rainy season has only just begun, and our pasture has started to grow. Buddy is eating less grass hay now, and eats pasture about 20 hours a day. (This is about what horses in the wild do). I will continue to supplement his feeding as he needs it, but I have high hopes that he will thrive on our lush pasture, with grass hay, Equine Senior, and Legacy pellets as added nutrients.

And now that his weight is in a respectable range, I will continue his saddle training, and see how much he really knows (or remembers). It is hard for me to look at the photos I took six weeks ago - to see how skinny he was when I got him. But he looks great today. I'm guessing the old horse is between 20 and 25 years old, and with a little more riding, will turn into the kindly old gentleman that I've been looking for to carry me around the woods from time to time. At any rate, it makes my heart glad to see how handsome he has become. I hope you think so, too.

As winter looms, there are more and more free horses advertised in the newspaper and on the internet. And horse adoption centers are filled to the brim with horses needing homes. If you have the space or the pasture or the room in your heart, please consider taking in an unwanted animal and giving it a home. You will be amply rewarded.
Posted by Linda Benson at 10:00 AM

Buddy reminds me of our old Thoroughbred, who was about 800 pounds when we bought him 25 years ago at age 9. We finally got him up to about 1000 pounds, but, because of his heaves, no more than that. We had him for 21 years and he was a wonderful companion all that time. Congratulations on your new friend, Linda. Sarah